The South Kitikmeot Project is divided into four separate sections, being: 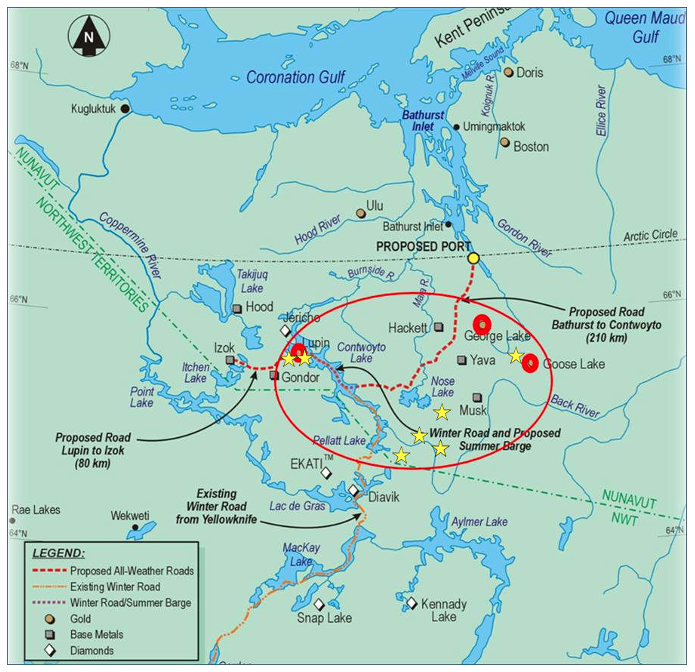 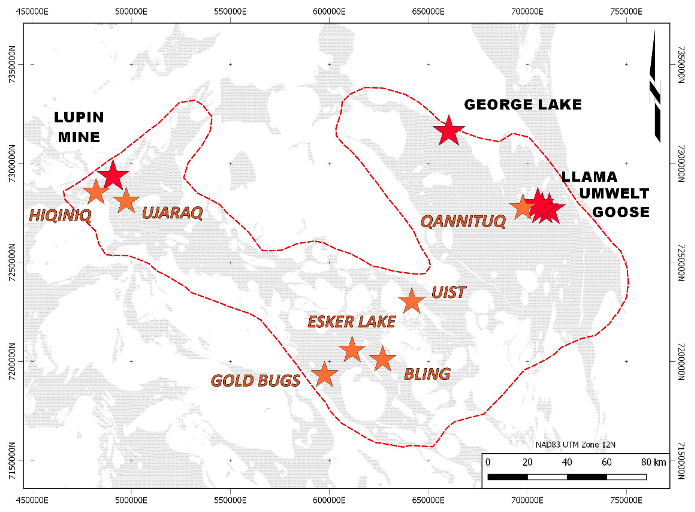 The South Kitikmeot Project is situated in a broad arc of metamorphosed Archean sedimentary and volcanic rocks extending northwest from the Back River area to the Lupin Mine area on Contwoyto Lake. The property is underlain by porphyroblastic greywacke, mudstone and carbonaceous shale metamorphosed to lower amphibolite grade and assigned to the Beechey Lake Group. The regional strike of the rock units is northwest, but locally the metasediments are wrapped around domal intrusions of granitic rocks and orthogneiss. In general, the rock units are tightly to isoclinally folded.

The South Kitikmeot Project covers occurrences of iron-formation-hosted gold mineralisation. It is located in a belt of permissive metasedimentary rocks (Archean Beechey Lake Group) which host the Lupin Mine and the Goose Lake and George Lake Deposits (Sabina Gold & Silver Ltd).

This class of epigenetic deposits occurs in reactive iron-enriched sediments, where cut by faults or fractures providing conduits for hydrothermal fluids carrying gold in bisulphide complexes.

Each of the three showings at Park Place has yielded high-grade gold rock chip samples and economic mineralisation over suitable widths has been found in drill holes and trenches at the Esker Lake and Bling showings, details of which are set out in further detail in the Independent Geologist’s Report annexed to the Prospectus.

The Bling and Gold Bugs showings have received only preliminary exploration, and there is a significant, partially tested drill target at Esker Lake.

Limited exploration has been undertaken at the remainder of the sections, which is made up of the following favourable results:

(i) Uist: a program of rock-chip sampling undertaken during 2016, which yielded favourable gold grades; and

(ii) Lupin: a program of rock-chip and boulder sampling at the Hiqiniq claims, which yielded favourable gold grades.

A summary of the exploration activities undertaken at the above claims is set out in the Independent Geologist’s Report in Annexure A.

The Company intends to undertake a program of geological mapping and further rock sampling in respect of the known prospects within the South Kitikmeot Project. Re-interpretation of existing surface magnetic and electromagnetic data is required with possible re-surveying if data can be improved with more contemporary techniques.

Should positive geophysical and geological survey results continue, the focus will be to delineate potential diamond drill targets.